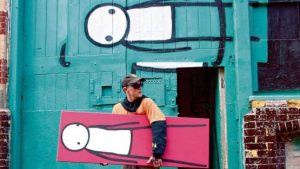 Stik is an anonymous British Street Artist. He is famous for his iconic images of stick figures painted on walls and surfaces around the world. Born in the mid-1980s in London, the Artist, like his contemporary Banksy, has revealed little about his personal life. Despite his fame he remains careful and respectful of the community who live amidst his work. For Stik, the community relationship is central to his process of making street art. He states that “I always get the endorsement of the people who actually live there. That’s the most important thing’. His figures tell the story of his community, and he extends that by working with hospitals, charities, and homeless organisations.

Painting from his own experiences as a young homeless man, he has stated that his work “is loaded with a kind of melancholy”. Stik became homeless around the year 2000 which would last for around 10 years. He would count on his friends for a place to stay and also spent many nights in abandoned buildings. He lived through a lot of violence on the streets and remembers times when he felt his life was in danger. In the early 2000s his figures began popping up around East London. Stik’s approach to public spaces is mindful and considered. He prefers to harmonize with the nearby architecture and location and has argued that he would never bomb a street or community. Stik’s beliefs about the nature of graffiti and art reflect a traditional, romantic ideology of the street. “Artistic statements should be free from censorship,” he says.

Stik challenges his audience with the most simple imagery possible. The heads are round. The eyes are dots. Bodies are rectangles and simple lines become arms, hands, and legs. Yet, they are more than just stick figures. His characters become a type of emotional shorthand to reflect his mental state and emotions. They have no mouths, they’re silent and there to observe. He wants to create art that looks back at his audience. Stik’s characters and their postures seem to give the impression of longing, sometimes even despair. Ultimately, his art is about helping to give a voice to marginalised communities and to draw attention to people who feel forgotten.

A career defining moment for Stik, was in 2008 when work he was part of an exhibit at The Foundry; a legendary East London music, and art space. ‘That was a very important venue for me because I used to clean the toilets there,’ says the artist. Stik has gone on to take part in many exhibitions worldwide.