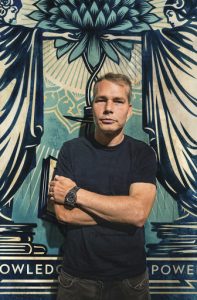 Frank Shepard Fairey was born 15th February 1970 in South Carolina, USA. Fairey graduated from the Rhode Island School of Design in 1992 where he earned his Bachelor of Arts in illustration. He is now a contemporary street artist, illustrator, activist, and founder of OBEY Clothing. A brand that formed out of the skateboarding scene. Fairey became more widely known in 2008 when he created his now famous poster of Barak Obama. Fairey’s iconic poster of President Barack Obama became the official emblem associated with the presidential campaign. It was a piece that represented propaganda, portraiture, and political power.

Taking inspiration from major artists such as Keith Haring and Andy Warhol, Shepard Fairey blurs the line between fine and commercial art. A major artist of the street art movement, Fairey became known in the 1990s through the dispersion of posters, stickers, and murals. In 1989 Fairey created the André the Giant, os often considered his first piece. He saw the image of him in a magazine and decided to bring it into the realm of street art.

Shepard Fairey is also famous for his activism and humanitarian acts. After the 2015 Paris attacks, the artist paid a tribute to the victims with the creation of a poster. The piece depicted Marianne, the French national icon, surrounded by the French motto. In June 2016, Shepard Fairey reproduced the image as a mural in Paris. Fairey then offered the poster to French President Emmanuel Macron who hung it in his office. The artist also founded in 2007 the Obey Awareness Program, operated by Obey Clothing. This was set up to add to his humanitarian efforts. This program allows Fairey to support handpicked causes he believes in by selling his own merchandise and donating 100% of the profits raised. In the early 2000s, Fairey began donating to organizations like Chiapas Relief Fund or Feeding America.

Throughout his career, Shepard Fairey has held several solo and group exhibitions across the world. Cities including Grenoble, New York, Paris, Vancouver, London, Providence and Los Angeles. His career has been so defining due to the topics he approaches in his works. Themes such as rebellion, racism, gender inequality, xenophobia, propaganda, war and peace, and economic imperialism. Shepard Fairey currently lives and works in Los Angeles, California in the United States.