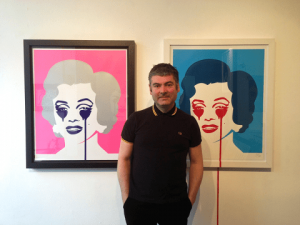 Charles Uzzell Edwards is a graffiti and street artist, better known by his alias Pure Evil. Born in South Wales, he is the son of late Welsh painter John Uzzell Edwards. Talking of his moniker Pure Evil, he has said that “it has been a license to have some fun with darker imagery. It also reflects the darkness that is in the world in the present day. You can not just ignore it and do cheerful nice pictures of unicorns. Unless of course it is a unicorn that has a rocket launcher on top of its head.”

After completing his fashion degree in London, he moved to California’s West Coast where he worked as a designer. Pure Evil’s street art started in California, where he would paint on freeways and gun stores. After a decade in California, he returned to London and began painting his signature bunny rabbits. “I started to miss London”, he explains, “It’s a dirty places, but it’s the dirt that helps things to grow.” Upon his return to the UK, he was able to refine his style by tapping into the darkness present in the world. For several years, h has experimented in range of media. These include spray paint, pastels, paint, acrylics, neon, steel, stencils, as well as various methods of screen printing.

Pure Evil still lives in London, working from his gallery and studio in East London. He has exhibited globally, with notable solo shows held in countries all over the world. He also produces electronic music, regularly gives workshops, and participates in lectures about street art.