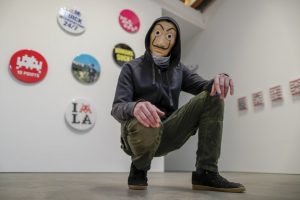 Invader is a French graffiti artist, born 1969. Throughout his career he has remained anonymous by painting late at night in a mask. He began plastering mosaic Space Invaders, a character from a retro video game, on the evening streets of Paris in 1998. He immediately gained notoriety and the works soon became popular in cities around the world.

Invader studied at the Ecole des Beaux-Arts, a Parisian art school. Although, he often tells interviewers he graduated from a tiling school on Mars. Although Invader focuses on video game characters, he changed his design so they blend in with their surrounding environments. Invader says that his real-life artistic invasions are much more entertaining to him than anything he’d ever found in an arcade.

Invader makes the mosaics by using weather-resistant tiles. The installation process can take at least one week. This even includes scouting, recording, and mapping locations. One of Invader’s most famous locations was the Hollywood Sign in California, with the artwork put on the “D,” on December 31, 1999. Authorities caught him in 2010 for working on the Hollywood sign again and he had to pay a fine. In addition to mosaics, Invader experiments with other mediums and creates pixelated works using Rubik’s Cubes. Throughout his career, Invader’s works have featured in galleries around the world. He gained even greater popularity after he featured in the famous Banksy documentary about Street Art, Exit Through the Gift Shop.

The artist continues to work in Paris and it serves as his primary location. In June 2011, he marked the anniversary of his 1000th work in Paris with an exhibition at La Générale entitled 1000. Since 2000, he has also installed more than 70 pieces of work around Hong Kong. As of January 2020, Invader had created mosaics in 79 cities, with 3858 Space Invaders comprising over 1.5 million ceramic tiles.