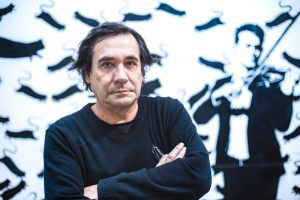 Blek le Rat, or Xavier Prou, is a French graffiti artist, born November 15, 1951 in the suburbs of Paris. He studied printmaking and painting at the École National Superieure des Beaux-Arts in Paris. He uses stencils and spray paint to create wall paintings, often conveying provocative and controversial statements. The artist’s interest in social commentary, has had a major influence on street artists around the world, including Banksy. He focuses on topics such as religion, the economy, and the military, in such a comedic manner that is necessary for graffiti artists.

Blek began working in 1981, painting stencils of rats on the walls of Paris streets. He described the rat as “the only free animal in the city”, and one which “spreads the plague everywhere, just like street art”. His name originates from the comic book Blek Le Roc, which uses “rat” as an anagram for “art”.

Influenced by the early graffiti of New York City, he instead chose a style which he felt better suited Paris. In 1985, he was on the first meeting of the graffiti and urban art movement in Bondy (France), on the VLP’s initiative. Blek’s oldest preserved street art, was recently rediscovered behind posters on a house wall in Leipzig, Germany. French authorities identified Blek in 1991 when they caught him stencilling a replica of Caravaggio’s Madonna and Child. The police then connected Blek with the art he had done throughout the city. From that point on, he has worked only with pre-stencilled posters. This is because of not only the speedier application of the medium, but also the lesser punishment if the police caught him again.

He has had a great influence on today’s graffiti-art and “guerilla-art” movements. The main motivation of his work being social consciousness and the desire to bring art to the people. Many of his pieces focus on solo figures instead of larger groups, which helps stress the issues he is challenging. In 2006 he began his series of images representing the homeless. He would depict them standing, sitting, or lying on sidewalks, in attempts to bring attention to what he sees as a global issue.