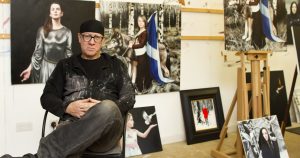 Gerard Burns was born in Glasgow. He graduated from the Glasgow School of Art in 1983 with a degree in Fine Art.

As a student, he conceived the band Valerie & The Week of Wonders with Brian McFie, Greg Kane and Ewan McFie. The group signed to A&M Records & Rondor Publishing in 1984. Burns was the singer, songwriter and guitarist. His subsequent band, Heaven Sent, supported Simple Minds.

He returned to painting in 1990, when he became a Principal of Art at St Aloysius’ College, Glasgow. After teaching for a total of 12 years, he became a full-time painter in 1999.

In 2003, Burns was the inaugural receiver of Not The Turner Prize for his figurative oil on canvas, Labyrinth. His painting A New Journey appeared on the First Minister’s Christmas Card in 2009 and featured Burns’ niece holding a saltire. In 2014, his 14 for 14 exhibition was launched during the XX Commonwealth Games in Glasgow. His Painting ‘The Rowan’ hung behind Alex Salmonds desk in the Scottish Parliament for the duration of his Tenure as First Minister. His portrait of Alex Salmond was unveiled in the Scottish Portrait gallery in Dec 2015.

In April 2015, on the occasion of Scotland Week, he opened the exhibition A Brush with Inspiration in New York, featuring 16 paintings of notable Scots, from Ewan McGregor to Nicola Sturgeon. After the high-profile SoHo gallery, he decided to show his works to the Scots in a shopping center in Easterhouse, which he saw as “a metaphor for areas of social deprivation and the thought that there shouldn’t be a postcode lottery when it comes to access to the arts.” He donated the paintings to raise money for a new hospice in Glasgow.

Burns usually takes photographs of his subjects before working on their portraits. The painter notes, however, that “each of the various pictorial elements also contains a deeper symbolic meaning… My goal is realism, but it’s by increasingly abstract means that realism is attained.”