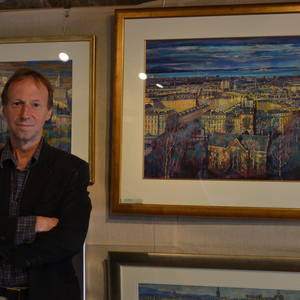 Allan Black was born in 1958. He studied at Glasgow School of Art in Scotland, graduating in 1980. His first solo exhibition was in the Maclaurin Art Gallery in Ayr and was a mixture of printing, painting and mixed media works. His interest moved to painting, his work being landscape based but having an abstract feel. His paintings tend to be looking at details in the landscape, like cup and ring marks on standing stones. He works mainly in acrylic, layering the paint using acrylic retarder, and also works with oil. His earlier paintings tend to be highly coloured and have an abstract feel.
After a visit to Provence he started to paint more representational landscapes. The landscapes attempt to capture the changing light and colours of the Provencal landscape. His French paintings are mainly Autumn landscapes with strong colour and dramatic lighting. His Scottish landscapes tend to be the result of studies made whilst walking in the countryside around Houston, where he lives, and also include harbour studies from the east coast of Scotland. His recent works are cityscapes which include studies in Prague and Edinburgh.
He also worked extensively on light and colour studies of Edinburgh from Calton Hill, which is located in the centre of Edinburgh in Scotland. The works are more subdued in colour and attempt to capture the atmosphere at certain times of day and different seasons.
He has had solo exhibitions in Ohio, South Carolina, Germany and Scotland and has been involved in group shows in Germany, France, Scotland and USA. He was awarded first place in the Fourteenth Ohio Regional Painting Exhibition and as a result was given a solo exhibition in the Cuyahoga Valley Art Center. He has been an artist member of the Paisley Art Institute for 22 years. Recently he has been collaborating with the poet Alistair Paterson and his painting was used for the front cover of the collection of poems Quadrivium- Poems from Four Paths. He also provided paintings to illustrate the new songbook of the songpoet Allan Taylor, and his paintings were used on the CD covers of Jackie Leven’s live albums Men in Prison and Man Bleeds in Glasgow. He has been a regular exhibitor with the Augenweide Gallery Munster, Germany.