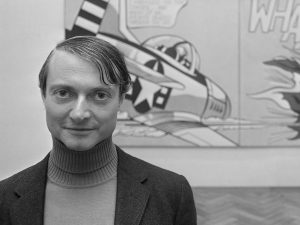 American artist Roy Lichtenstein was born in 1920 in New York. Lichtenstein’s career began as a Studio Arts student at Ohio State University in 1940. Though his studies had to stop due to the Second World War, he resumed in 1946. Studying under Hoyt L. Sherman who would be one of his greatest influences. During this period, Lichtenstein also began working on one of his first series. These initial paintings focused on mythology and folklore, often poking fun at medieval knights, kings and maidens. He then began to draw cartoon images from bubble-gum wrappers and became one of the most well-known pop artists of modern day art.

Lichtenstein began experimenting with different styles in the late 50s and early 60s. In 1957, he was painting in an abstract expressionist style, often incorporating cartoon characters like Mickey Mouse. By 1961, his style focused on vulgar cartoon characters, and commercial subject matter and techniques. He enlarged and reproduced Comicstrip characters with the same typographic screen techniques or prints with which they were first printed. He also employed the use of Ben Day Dots to replicate the look of commercial printing. Thus becoming an emblematic parody of the original. But this was not meant to bear a message of social commentary, ironic as it may seem. As with other Pop Art, subject matter dictates the use of materials, but in this case the message itself becomes an aesthetic one. In his reproductions romance characters, travel-posters, comic-book heroes, or stylised landscapes, Lichtenstein contrasts what is an emotional scene or object with a banal rendition.

Pop Art continues to influence the 21st century, with Roy Lichtenstein still at the forefront. In 2015, one of Lichtenstein’s paintings sold for $95.4 million at Christie’s, setting an auction record for the artist. Lichtenstein died of pneumonia 29th September 1997, four weeks before his 74th birthday. He died an international success, with his works held in collections all over the world.