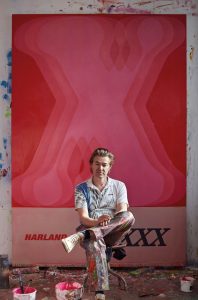 Harland Miller was born in 1964 in Yorkshire, UK, and received both his BA and MA from the Chelsea College of Art in London, where he currently lives and works. Miller first came to fame when he published a novel in 2000 called “Slow Down Arthur, Stick to Thirty.” It is the story of a young child who travels around England with a David Bowie impersonator.

In 2001, Miller began experimenting on a series of paintings based on the front covers of penguin books. Already an accomplished writer, it is, therefore no surprise his paintings explore the relationship between text and images.   The covers he paints often feature his own invented, cynical titles combined with the Penguin logo. His muted tones and painterly brushstrokes instill his canvases with the worn character of a used book. However, he adds commentary by exploring social and political issues with an air of subversive amusement. Miller combines text and images to comment on the frequent disconnect between representation and reality.

By referencing the iconic Penguin logo, Miller found a way to combine painting with his love of literature. Influenced by Pop art, his works focus on the capabilities of language within the visual field. As well as employing humor, irony, and emotion to explore not only the act of painting itself but also the complexities of the spoken and written word.