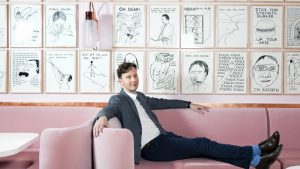 David Shrigley OBE is a British visual artist. He was born 17th September 1968 in Chesire, England. Shrigley received his BFA from the Glasgow School of Art in 1991. He lived and worked in Glasgow, Scotland for 27 years before moving to Brighton, England in 2015.

Shrigley is a widely celebrated Contemporary artist known for his distinctive style. He combines handwritten humorous text with child-like imagery including animals, people, and everyday objects. His flat compositions take on the mundane, yet sometimes bizarre elements of daily life.  Tackling serious issues, such as unemployment and child welfare, combined with his more absurd subjects, can be both poignant and funny. As well as his drawings, Shrigley also creates large installations and sculptures, plus several books, videos, and photography.

His work is in exhibitions worldwide, including New York, Copenhagen, Paris, Los Angeles, among many others. He is the recipient of several honours, and notably nominated for the Turner Prize in 2013. In 2016, he created a new public sculpture for Trafalgar Square’s “Fourth Plinth” in London. The Sculpture, “Really Good,” was a ten-metre-high hand giving a thumbs up. Shrigley hoped that the sculpture would bring positivity to the city of London and its people. David Shrigley still lives and works in Brighton, and continues to make thought provoking art.

Any cookies that may not be particularly necessary for the website to function and is used specifically to collect user personal data via analytics, ads, other embedded contents are termed as non-necessary cookies. It is mandatory to procure user consent prior to running these cookies on your website.