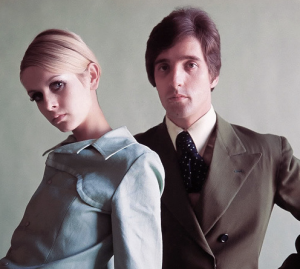 Justin de Villeneuve is a photographer, producer and entrepreneur who was a major influence on the fashion and culture in the Swinging 60s. De Villeneuve, born Nigel Jonathan Davies in London, known for being supermodel Twiggy’s manager from 1966 to 1973. After leaving school aged 15, he earned a living as a boxer under the name Tiger Davies (“my first soubriquet”). Having earned his stripes, the young Davies was employed by various East End villains as a bodyguard, auction barker, and all-purpose factotum, eventually ending up under the aegis of the Kray brothers.

De Villeneuve worked as a Mayfair hairdresser under the name Christian St. Forget, before meeting Twiggy as a teenager. They became a couple, and as her career as a model took off, he became her manager. Of his first encounter with Leslie Hornby, de Villeneuve says, “She was wafer-thin, and she had this angelic face and swan-like neck, with this incongruous Cockney twang. I was bowled over.” Leslie’s nickname came about as that task was being taken care of. “My brother called her Twiggy to wind her up, and when we got Barry Lategan to do her first set of pictures, he said, ‘That’s it, that has to be her name,’” de Villeneuve explains. By this time, he’d settled on his final nom de plume, too. “I liked Justin, then someone suggested the name of a French town for a surname. I said, ‘What, like Harlow new town?’ And that was it — Villeneuve.”

Throughout his career, he also managed rock’n’roll artists like Tim Hardin, Jackie Lomax (for the Beatles label Apple) Jack Bruce who had recently left Cream when Justin helped him form the Jack Bruce Band. Justin was also an associate producer of ’The Boyfriend’ directed by Ken Russell. As a photographer Justin photographed many icons of the 60’s and 70’s. Nowadays Justin photographs birds of the ornithological kind.