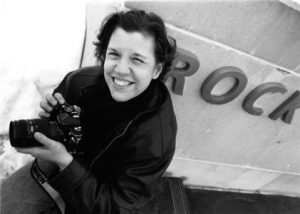 Janet Macoska grew up in Cleveland with a love for rock and roll and photography. Her career began at the age of 12 when she photographed rock duo Sonny and Cher at a local radio station. That photo became her first published photo in a 1967 issue of Teen Screen Magazine.

Since 1974, Janet Macoska has been capturing rock’s greatest on camera. She has enjoyed a successful career with work featured in popular magazines, galleries, and museums. Amongst the publications her work has been in are Rolling Stone, Vogue, NY Times, and London Times. VH1, Bravo and A&E often uses Macoska’s vast rock archive in their “rockumentaries.” Her work is in the permanent collection of The Rock and Roll Hall of Fame and Museum, The Smithsonian Museum of American History, and The National Portrait Gallery in London. As well as in Hard Rock Café restaurants, hotels and casinos all around the world. David Bowie, Led Zeppelin, The Clash, Devo, Heart, AC/DC, and The Kinks are some of the artists who have used her work on their cds.

The Rock and Roll Hall of Fame and Museum presented a retrospective exhibition of her photography in 2003 and 2004 entitled “It’s Only Rock and Roll.” That exhibition has since toured in galleries and museums around the US.

Today Macoska is primary photographer for The Rock and Roll Hall of Fame. As well as other companies such as Playhouse Square Centre and The Cleveland International Film Festival. She also still shoots freelance for corporate clients and music legends. She often lectures at museums and universities about her career as a photographer in the music industry.