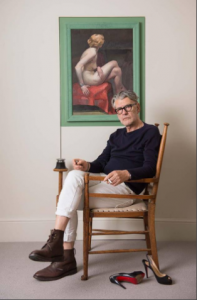 Jack Vettriano was born in St. Andrews in Scotland and grew up in the industrial seaside town of Methil about 30 minutes south of his birthplace. He grew up poverty stricken, sharing a bed with his brother and wearing hand-me-down clothes. From the age of 10, his father sent him out delivering papers and milk, cleaning windows and picking potatoes — any job that would earn money. His father took half his earnings.

Vettriano left school at 16 and later became an apprentice mining engineer. Vettriano took up painting as a hobby in the 1970s, when a girlfriend bought him a set of watercolours for his 21st birthday. His earliest paintings, were copies of impressionist paintings such as Claude Monet’s Poppy Fields. In 1987, when he was 36, Vettriano left his wife Gail, seeking to emulate Paul Gaugin. He quit his job in educational research, and moved to Edinburgh, where he adopted his mother’s maiden name. He applied to study Fine Art at the University of Edinburgh, but he did not get in.

In 1988 Vettriano submitted two canvases for the Royal Scottish Academy annual show. Both paintings sold on the first day and several galleries approached Vettriano afterwards. Further exhibitions followed in several cities across the world. In November 1999, Vettriano’s work was on display for the first time in NYC. 21 of his paintings were part of the The International 20th Century Arts Fair. More than 40 collectors from the UK flew out for the event and 20 of his paintings sold on the opening night.

Vettriano is a self-taught artist whose style focuses on manipulating paint in veiled glazes and meaningful shadows. Vettriano’s art is comparative to past artists such as Hopper and Sickert, and his scudded beaches to those of Boudin. In many of his paintings, there is a hidden narrative, in mysterious compositions, a starting point of short stories.

Jack Vettriano has enjoyed a celebrated career. In 1996 Sir Terence Conran commissioned Vettriano to create a series of paintings for his new Bluebird Restaurant in London. The seven paintings, inspired by the life of Sir Malcolm Campbell, hung there for ten years. The Bluebird paintings went up for auction by Sotheby’s at the Gleneagles Hotel in Perthshire in 2007, and made more than £1m in all. The most expensive was Bluebird at Bonneville, bought for £468,000. In 2003, Vettriano received an Order of the British Empire (OBE) award for Services to Visual Arts during a ceremony at Buckingham Palace.