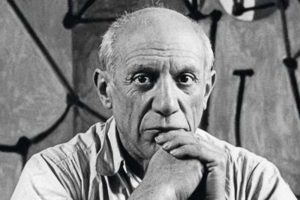 As one of the most influential Modern artists of the 20th century, Pablo Picasso is an artistic master to this day. Born on October 25, 1881, in Spain, Picasso was a child prodigy, as recognized by his art-teacher father. As a young man, he went to Paris and learnt from other artists such as Edouard Manet and Henri de Toulouse-Lautrec, whose sketchy style impressed him. Before Cubism, Picasso went through several other styles. These included realism, caricature, the Blue Period, and the Rose Period. We can see each of these genres throughout his original works as well as the ceramics, lithographs, linocuts, and etchings that he created later in his life.

The Blue Period dates from 1901 to 1904 and focuses on outcasts, beggars, and prostitutes. The most important work from the period, La Vie (1903), was in memory of his childhood friend who had committed suicide. The painting started as a self-portrait, but Picasso’s features became those of his friend. The composition and gestures are stiff, and as the name suggests, the tones are blue. The Rose Period began around 1904 when Picasso’s palette brightened, using pinks, beiges, and light blues. His subjects were usually circus people, harlequins, and clowns. One of the most known works of this period is Family of Saltimbanques (1905). The piece portrays a group of circus workers who stand as a group but appear to be incapable of communicating with each other.

With his groundbreaking 1907 painting Les Demoiselles d’Avignon, Pablo Picasso developed a revolutionary style of modern art called Cubism. It was a technique that brought different views of subjects into one picture. Picasso distorted figures and objects into geometric shapes, often including elements of collage in his works. This resulted in the abstract, fragmented paintings, and a modern art movement that defined the 20th century. Picasso enjoyed many artistic mediums throughout his life and he became a master in each. From ceramics and paintings to lithographs, and etchings his works were a testament to his artistic skills.

Pablo Picasso died of heart failure 8th April 1973 in his French home. At the time of his death, Picasso’s works were a mixture of styles. Devoting his full energies to his work, Picasso became more daring and his works were more colourful. It wasn’t until several years after his death did the critical community characterise these works as Neo-Expressionism.