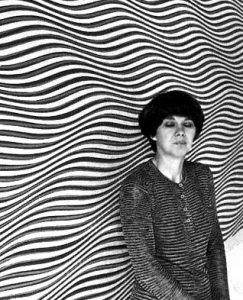 Bridget Riley was born in London and spent her childhood in Cornwall and Lincolnshire. She studied at Goldsmiths’ College from 1949 to 1952, and then the Royal College of Art from 1952 to 1955. She has spent her career experimenting with several different art genres, however her most prominent and career-defining exploration came in 1960. Riley is most known for evolving a style that explores the illusions of optical phenomena. Optical Art or ‘Op-art’ as it is known produces a disorienting physical effect on the eye.

Riley can spend at least six to nine months developing a painting. They are large and very intricate so require lots of time and attention. The process begins by experimenting with colour and Riley will hand-mix all of the paints. She does this because the exact hue and intensity is vital to the piece and must be kept constant. Successful studies lead to full-size replicas on paper and will be used for the final product. Everything is painted by hand which makes each piece even more special.

Bridget Riley is a constant innovator who experiments with new techniques. She regularly comes up with new ideas that inspire other artists in her field and for this reason, no one can predict what she will do next.  Now in her late 80’s, Bridget Riley continues to exhibit around the world– Sydney, Tokyo, New York, Zurich, London to mention just some of the cities where her work has been shown recently.